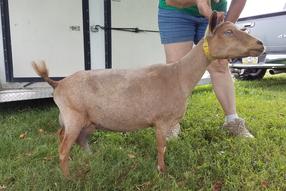 ​Creole is one of my favorite does - she is beautiful and has a lovely udder. (see inset photo)  She is very dairy and feminine.  Creole has one leg towards her championship, and has only shown a few times.  We have retained her 16 and 17 daughters for ourselves!  Blue Eyes. Bred to Kamo for May kids. 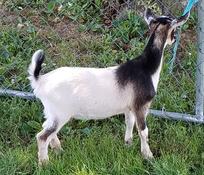 I don't really advertise the junior does until after they kid, but had a few photos so threw them in this year!  We have kept a few dry to be dry yearlings in 2017, and did some fun line breeding on a few as well. ​Sorry about all the rear facing shots - the kids would not stand still!  At least I got a picture before winter hair! 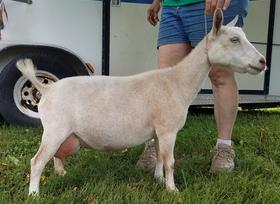 Jingle was born here with an identical twin sister SGCH Tiny Town Treble 3*M. I had to put coded collars on them to tell them apart.  Her last LA score was an 89 and she too marched easily to her milk star on a hot humid one day test .  Jingle is a lovely doe that has given us several nice kids along the way, and hopefully a few more to come!  FS 89 VVEE  Bred to Kamo for April kids.

Well she is pretty darn awesome. Surely was having a bad day in this photo as it was very hot - long appraisal day. She is however, long, level, strong, with a milking udder with large easy to milk teats. We just love her and so did our 2017 appraiser. 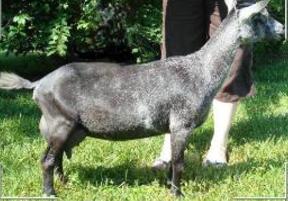 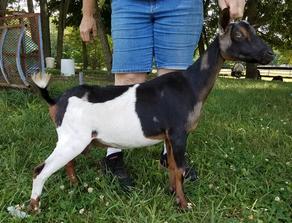 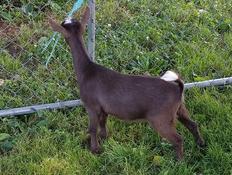 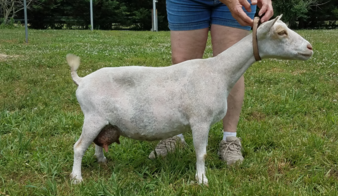 Kiss is truely a lovely doe. Heavily line bred on Grits, she was a FF 2 yr old last year and had a small, but perfectly shaped udder.  We gave her another year and shazaam !  Proving once again that you MUST be patient in dairy goats.  Her body got deeper, and her udder grew up with her. It is perfect...almost.  We were thrilled with her 2nd freshening 3 yr old LA score of

Jaunt is the first doe kid I have purchased in NDs in a decade. She is a grand daughter of SGCH Tiny Town Treble -  and her mother is just amazing. Welcoming back some of her lines. Bred to a Henri son for a line breeding on the dam side. 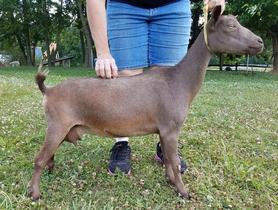 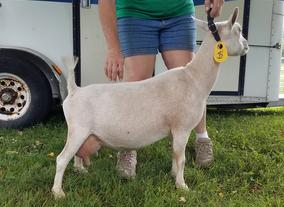 Tiny Town Kiss This - One

So my Bronze got no help from me - LOL.  She freshened with a very pretty udder in 2017 (2nd freshening) after having a single doe kid.  I had decided to cut back the milkers to get my chore list down and then appraisal day was 2 days out and OMG I forgot she needed to be appraised. So pictured here during dry up.  We were very happy with her FS 87 VE+V  score considering we didn't milk her in 2016 and being almost dry for appraisal.  I did a tight line breeding on this doe this year to Tiny Town AL Sterling (trying to produce super milk!  1st doe retained. 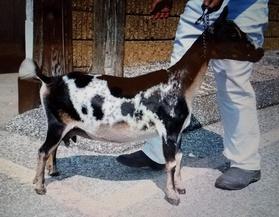 Belle was bred to milk - She was a FF in 2016 with a correctly shaped udder , but we dried her up as part of the chore chopping for our mental survival - and did not make appraisal in late June 17.  Belle's nick name comes from my husband who thinks she looks like a Belted Galloway cow out in the field (her other side is a white stripe.  Belle threw a crazy marked doe in 2017 and you can see she has moon spots as well.  Expecting higher capacity in 2018 and we are anxious to see what she gives us. 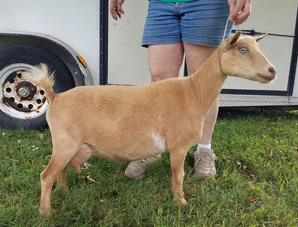 (Tiny Town BP Bronze Beauty X Sweet Garden Henri Hertz ) bred for May kids to Henri son for a tight line breeding on the sire's side.

Amber is a really nice doe, that we haven't yet seen her potential.  She was a dry yearling , gave us a single buck in in 2015, and then finally a doe kid in 2016 that is owned by a local 4Hr. She has a beautifully shaped udder that needs more capacity, and we hope to see that in this freshening.  Bred to Kamo for April Kids.

The reserve queen!  This doe goes reserve almost every time she shows - argh! She is awesome.  Her udder is perfectly proportioned, milks, she has a beautiful foreudder that is very smoothly blended, and is a deep bodied doe with capacity.   Bred to Kamo for May kids. 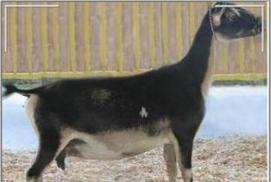 My view from the milk room window , June 2017 - this makes me smile!  Left to right: Surely, Dollar, Luna, Bronze, and Kiss. 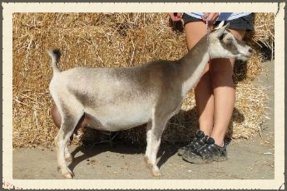 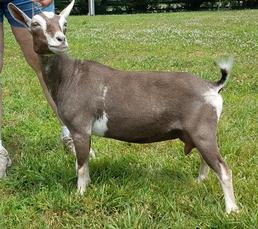 Topaz is our herd queen!  She was our first Superior Genetics Champion, she was our first LA Excellent 90 doe, and ranked 4th on the ADGA Breed Leader list for Top Ten in 2014 milking nearly 1300 pounds! Her mammary is perfect, we wouldn't change a thing.

Marble was dry in 2017 (aborted) so she did not make appraisal or the show ring etc.  She had a very pretty udder in 2016 and has powerful genetics behind her. Her dam, Topaz was ranked #4 nationally in 2014 for milk production, and her sire is a litter mate to the Res. National champion doe Dill's XM Keena.   I can't believe I can't find a photo of Marble from previous years...she is VERY flashy silver roan, brown, white and black.....  she gave us a doe kid in 2016 who looked just like her!  Bred to Kam for April kids.

Fifty is our first home bred champion.  This doe MILKS!  She easily earned her milk star on a one day test competition in extreme heat after being hauled across the state.  She has lovely soft teats that gush the milk, making her the choice doe for teaching others how to milk for the first time. She has an LA 90 E  and is just a lovely doe.  As she has aged (born in 2005) we are seeing some sagging in her upper attachments, but other then that we wouldn't change a thing about her. Blue eyes.   FS90 EEEV

This is a doe you are going to have to take my work - LOL -  while doing this edit I noticed all her milk data is missing from the data base.  So Dollar MILKS - she is my current heaviest milker ranging from 4-6 lbs per day depending on stage of lactation and weather!!!  She gushes at the pail - she is HIGH - WIDE - and plumb teats...and absolute joy to have around.